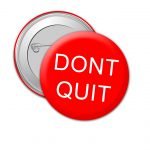 Occasionally, I am amazed at the perseverance of some of the Biblical characters. Elijah and the drought, for example. The prophet prays for rain, asks his assistant if he sees anything—nothing—and so Elijah goes on praying. I would have looked at the sky a couple of times and figure God wasn’t going to come through for me. Then I would have gone home.

And think about Anna and Simeon who waited for years around the temple in Jerusalem for the coming of Messiah—a lifetime—before Mary and Joseph brought the baby Jesus.

And there are other stories about hanging on; of people who knew instinctively to PUSH, that is “pray until something happens.” How many of us have that kind of trust? How many times have we stopped, given up and concluded that God did not hear, or that, “no” was His answer.

I worked with the Forest Service doing timber inventory during the summers while I was in college. The job consisted of two-man crews fanning out over the forest to measure and count the trees in designated locations. Not infrequently we worked in obscure places far from road and trail. We navigated with compass, map and aerial photographs.

At the end of one day a crew turned up missing. We all sat around camp and watched the road expecting to see the headlights of the missing guys in the distance, but as it got later and later it was plain that they were still out in the woods somewhere. There was nothing to be done until daylight, so we all agreed to go to the place where they had likely started out the previous day and begin searching.

It was barely light enough to see when we got to the parking area where the lost crew had left their rig. We all piled out of our trucks and prepared to plunge into the trees to start looking. And then we heard it: the sound of angry cursing somewhere in the forest gloom. If there had been enough daylight I am certain the air would have been blue with colorful profanity the sound of which drew nearer every moment. Sure enough it was John, one of the missing crew members who heard us coming from where he spent a cold and uncomfortable night not 100 feet from where his truck was parked. Of course, in the pitch black of the forest at night he had no idea how close he was. In any case, the lost crew stopped walking 100 feet to soon.

There is a spiritual truth to be learned here. We should be careful when we’re tempted to stop along the way. We really never know how close we are to our goal.