All day I’ve been humming a song that we sang at the 69th Street fellowship yesterday. Kathleen, who brought her guitar to the meeting, taught it to us and it led to significant worship. Apparently, the song was from a worship leader at Bethel Church in Redding. She sent me the link and I watched it this morning during my prayer time. 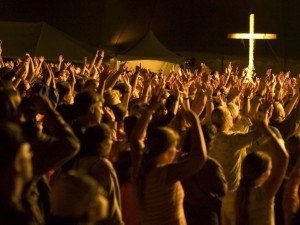 I was moved, though I had to get over the feeling of being a “worship voyeur.” I felt like an outsider, peering through the window at a community to which I did not belong; at an event to which I had not been invited. Worship is that kind of experience, a private affair, not a media event. Nevertheless, I felt myself being drawn into the music. The result was that I have been humming the tune all day.

There was another outcome, though. As I observed that worship service on YouTube, there was a sense of the familiar. I was reminded of the worship services at our old church during those heady days of spiritual renewal in the 70s, but with an objective sense of reality that only comes with the passage of time. As I observed the auditorium, filled with people, I recalled those with whom I shared sweet worship so long ago; how a significant number grew disinterested and drifted away. And I wondered how many of the crowd on the screen would also grow weary of their journey of faith in the coming years.

My prayer time became a mixture of joy and sorrow.

In the Sonship studies that Jody has been doing for nearly five years, and which I have just begun doing with a group of men, the first few weeks are spent praying about what it means to be a follower, a disciple. The discussion arises from the observation that among those who listened to the Master’s teaching there were multitudes that came because they enjoyed hearing him; sought the bread and the fish, and marveled at the signs and wonders. There were multitudes, but relatively few followers, the real disciples.

That was the feeling I found mixed with the sweetness of worship. How many followers, Lord? And what of the multitudes? What of the ones with whom I enjoy worship today? Of the faces turned in awe toward heaven, which ones will remain in the years to come?