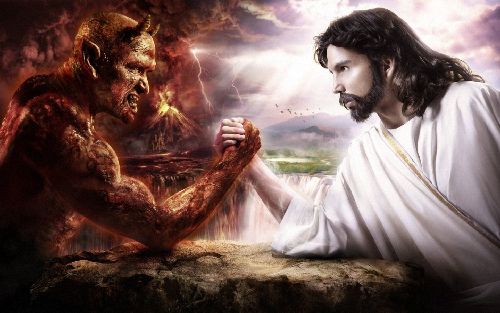 [Continuation of the thoughts from December 3, 2014]

No sooner had the first humans screwed things up, the Creator was making plans for the first Christmas. The plan included a declaration of war. If you haven’t browsed my post, The Battle Cry of Bethlehem, this would be a good time.

The war of Christmas started rather quietly as wars go. It didn’t start with an opening shot; it started with the birth of the commanding general. Then it was 30 years while He grew into His rank. The opening shot, as it turns out, was at the baptism of this promised liberator (Matthew 3:16-17 and on into chapter four). In that instant, He assumed his role as the commander of the resistance; the leader of the revolution that would overthrow the illegitimate government of the serpent. He emerges from the water and is deployed to the desert to meet His Father’s ancient enemy in battle. This is no pleasure walk. This is the spiritual version of hand to hand combat; the beginning of a revolution.

Imagine this encounter as though it were a physical confrontation:

Jesus walks alone among the crags of the desert wilderness, waiting to catch a glimpse of the dark warrior that plundered His Father’s garden paradise. The evil one is biding his time, thinking to find Jesus weakened and vulnerable.

Then, after 40 days, they come face to face. They circle one another, each sizing up his foe until, suddenly, they rush forward and the battle begins.

They are locked in combat. The dark lord snarls into the ear of the Liberator: “Hungry, yes? Then why not eat? If you’re the Son of God, then command these stones to become bread…”

The body of the champion of God is weakened for lack of food, but He has been feasting on his Father’s words for 40 days. There is hidden strength in this. His muscles tighten against the hold of His opponent. The grip of the dark warrior loosens and breaks, throwing him off balance. He staggers back as Jesus roars his response: “It is written, man shall not live by bread alone, but by every word that comes from the mouth of God!”

For an instant, the evil one seems confused, but recovers quickly. He crouches, taut and wary as he prepares to attack again…

The encounter in the desert was the opening battle of the revolution. Jesus proved his superiority over the foe by deflecting every weapon in the arsenal of darkness (1 John 2:16). Furthermore, He demonstrated how he intended to equip an army to overthrow the government of the serpent. The revolution would arise from among the humans that had seemed so weak in the Battle of Eden. Jesus, the captain of the armies of God, would call for volunteers for the resistance, train them for battle, equip them with the weapons of the Spirit (Acts 1:8) and then deploy them—soldiers of God—to fight the last battle of earth until the works of the devil are destroyed (1 John 3:8).