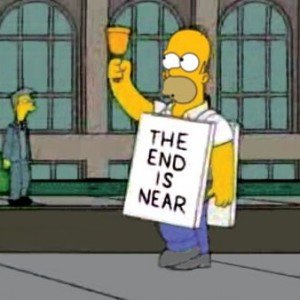 As I said in the previous post, Christian history is littered with discarded promises that the end is near. There has been no shortage of earnest seekers and pompous bunk-shooters. Across the centuries they have kicked the eschatological tree and shaken loose more than a few believers.

Up to now, if you hadn’t noticed, the forecasts that the end is near haven’t amounted to much.

Still, as the prospectus of most mutual funds will warn, “past performance does not predict future results.” That is a warning not to expect your financial picture to be reliably rosy. On the other hand, the knife can slice both ways. Stellar returns can tank overnight; but, dismal performance may level out and climb to new heights.

I remember the fable about the boy who cried wolf. After a few times of responding to false alarms, the townspeople ignored the boy’s cry and kept about their business even when the real wolf came prowling. There was a lesson for the shepherd boy: Don’t waste your credibility. There was also a message for the villagers: Don’t grow complacent.

The value in past prophetic missteps and present, even future (assuming there is one) prophetic possibilities is they can keep us awake.

I have to wonder if that is exactly what Jesus and the apostles had in mind when they were deliberately vague concerning these matters. Maybe it was to keep us on our toes. If that was their reason, I’d say they were successful. In nearly every century, the contemporaries have imagined the end is near; that they would see the parousia.*

So, here we are, yet another “omega generation,” scanning the heavens and The Book, looking for signs. Some think they’ve found them. Perhaps they have. But rather than fret over the prophecies, maybe it would be better to let the warnings awaken in us a sense of urgency. They should incite us to ask, “if these things be so, how then shall we live?” They should challenge us to live differently. Ask yourself the question, “if I knew I only had a few more months before the end of days, would I change anything?”

If you would, what are you waiting for? The second coming?