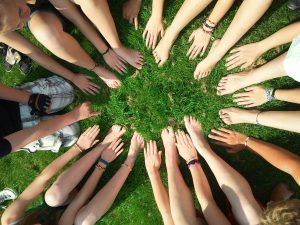 I was talking to a friend of mine at the gym this morning. I don’t know how we got around to talking technology. I think it was my complaint that a favorite prayer walk of mine had been fitted with security cameras. Anyhow, one thing led to another and we began reflecting on the internet and the essential part it plays in our daily life. We remarked that if something ever happened to this essential infrastructure, we’d all be “hurtin’ fer certain. ” We ended our conversation reflecting on what has been called TEOTWAWKI, “the end of the world as we know it.”

And that’s how we got to talking about how folks would navigate such a scenario. It brought to mind a conversation I had with my dentist many years ago. Theo (that’s my dentist) spoke of a party he’d attended at which other professionals were discussing which investments were likely to withstand very hard times. After making the rounds of mutual funds, commodities, real estate and gold, it was Theo’s turn. “People,” he said.

People? Yes. Community. Friends. Family. You know, people. When all else fails what will really be the currency of survival in difficult times? Relationship. Authentic, reliable, loving relationships.

The end of the world as we know it, may well be the beginning of a world we might like to know, one where community sustains and nourishes us. That’s something we can begin investing in now.