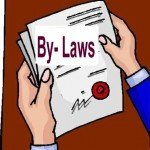 grandkids. Behind the wheel is a great place to consider important thoughts like whether the car is due to have the tires rotated at Costco or what are the implications of the latest research at the Large Hadron Collider in Switzerland.

The by-laws thing came as I considered my recent promotion to the role of “pastor ejectus” from a small, pretty traditional congregation. I was pondering the church, and by that I mean the mid-20th century congregations; churches that may be a threatened species among the ecclesial fauna of the new millennium. I wondered how folks at a Sunday morning assembly would respond if asked to produce the by-laws by which each of their families governed their lives together. Bemused chuckles, I decided. Why? Because families, close knit ones anyway, don’t have by-laws. They just love one another. Like rivers, they just find their course and flow.

And that, I decided, is a difference – not the only difference – between a church (the inherited church of 20th century America) and a family. That’s why the term ‘brother’ or ‘sister’ sometimes feels forced in a congregation. We know instinctively that the institution of which we are a part is closer to a business than a family. It has by-laws, hierarchy, elected officials and committees. It has staff and budget projections. In other words, it has things that, if interposed into a family, would hinder the growth of natural affection; things that work against the familial ‘we’ and toward the institutional ‘the church.’

I’m guessing here, but is it possible that most of us would prefer to be part of a family than an institution? And doesn’t Jesus invite us into such a relationship? I love the way The Message interprets Jesus’ words:

“Are you tired? Worn out? Burned out on religion? Come to me. Get away with me and you’ll recover your life. I’ll show you how to take a real rest. Walk with me and work with me–watch how I do it. Learn the unforced rhythms of grace. I won’t lay anything heavy or ill-fitting on you. Keep company with me and you’ll learn to live freely and lightly.” (Mat 11:28-30)

Some time ago a friend recommended I get a book called When Church was a Family by Joseph Hellerman. I think I’m going to download it into my Kindle.

6 thoughts on “Does your family have by-laws?”