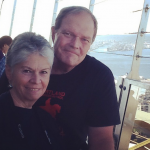 Dan and Jody dated for nearly five years before they were married.  Dan had Godly parents and a Presbyterian background and Jody came from an Episcopalian background. Neither had ever made a firm commitment to follow Christ.

It was the era of the “Jesus People” and Dan relates how he periodically encountered Christians with an energy and commitment to God that was foreign to him while dating. Dan and Jody frequented a Christian coffee house [Prince of Peace] where they met several individuals with this zeal for Christ. Dan describes their own commitments to Christ as minor.

On their wedding day [June 3, 1972] Dan was caught off guard by the high level of spirituality in the ceremony.

On their wedding night Dan and Jody stayed in the honeymoon suite at a luxury hotel [The Benson in Portland, OR], a gift from Jody’s father.

From their sixth-floor window they watched a parade in the street below [the Portland Rose Festival Starlight Parade]. Only twice did parade participants acknowledge them in their high perch. The first was at the very front of parade—the Grand Marshall who happened to be the President of the local Christian Businessmen’s Association [Bob Farrell of Farrell’s Ice Cream Parlors].  At the very end of the parade was a float on a flatbed truck with a number of the long-haired Jesus people, some of whom Dan recognized as patrons of the coffeehouse, who waved at the new couple.

From their vantage point they could also see the first word of a landmark sign which read: “Jesus. The Light of the World” [Apostolic Faith building on W. Burnside]. 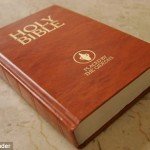 They picked up the Gideon-placed Bible from the night stand and he opened it randomly. The passage was 2 Chronicles 30, a section which calls individuals back to a faithful walk with God.  He began reading at the top left of the page which was verse 5, “So they decreed to make a proclamation throughout all Israel, from Beersheba even to Dan …”  Dan thought to himself, “that is interesting.”  As he continued to read he came across “…turn again unto the Lord…” (v. 6), “…yield yourselves unto the Lord…” (v. 8), and “if ye return unto Him” (v. 9).  On that first morning of their married lives, Dan and Jody both gave their lives to the Lord [June 4, 1972].

This was the beginning of not only their marriage but more importantly their Christian journey of faith.  They soon became involved in a large local Christian theatrical production, “Shekina,” produced by a well-known local personality [Jim Allen, a.k.a. Rusty Nails—it turned out to be a huge endeavor which nearly destroyed Jim].  This meant that Dan and Jody were spending 4-5 nights a week with other Christians, which helped their spiritual growth.

Soon they were attending a church with a great Bible teacher [Jerry Cook at East Hill Foursquare Church in Gresham] and Dan became an elder at the tender age of 25.

The eternal results from that one incident with one hotel Bible are significant.  To date, Dan and Jody have enjoyed a Christian marriage for over 40 years.

Dan and Jody began to attend a different church [New Song] where once again he became an elder.  Later the church asked Dan to be an Associate Pastor.  In the 1990s Dan and Jody were involved with a community of house churches.  Then Dan became the Senior Pastor of a local church.  Dan has also been involved with Pastors Prayer Summits and today is coordinates a network of house churches.

Dan also has served as the manager of a Christian camp and was a high school teacher in a public school [Gresham].

Like Dan, Jody has served our Lord in many other ways such as directing the women’s ministry for a 1200 member congregation where she supervised a dozen bible studies.  She has worked with women as a teacher and Biblical counselor for over 25 years, is the founder of Abide Ministries and is women’s representative for International Renewal Ministries. She also works as a facilitator of prayer summits for men and women in ministry, teaches at retreats and conferences, and helps local churches develop and strengthen their women’s ministries. Most recently, she has coordinated the planting of “Sonship Studies” interactive and relational gatherings that focus on hearing the voice of the Lord and developing an intimate walk with Him.

Presently, Dan and Jody work with a community of home-based churches called the Summit Fellowships.