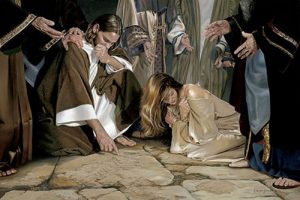 I’ve been thinking about the call for the church to be more inclusive. There is an event in the life of Yeshua that I think sheds some light on it. It’s in the eighth chapter of the gospel of John.* In the story, Jesus is teaching the people when some religious leaders, interested in catching the Rabbi in some inconsistency in His teaching, bring to Him a woman identified as an adulteress. The story famously recounts how the Lord refuses to be baited into the controversy and, instead, challenges the crowd to cast the first stone– but only if their righteousness qualifies them to do so. Put that way, nobody felt confident enough to render judgment, so they all slunk away, presumably irked that they had been outsmarted by Yeshua yet again.

As I read the story I notice a pattern for dealing with outsiders, people whose lifestyle and beliefs don’t fit within bounds of traditional Christian faith. Here’s what I see:

Every day I’m reminded of how challenging it is to navigate in a world that is trying to reshape the church. The pressure is intense. From outside of my conservative faith, comes the pressure is to loosen up a little; be more progressive. The times are changing. From inside, I’m pressured to take a stand. Proclaim the truth. Call a spade a spade.

My strategy is simple: Follow the Master’s example. First, don’t get drawn into unkind, judgmental conversations about groups or people. Second, always be ready to prevent harm directed toward others—regardless. Third, remind myself of my own brokenness and don’t flatter myself my regarding my behavior as more righteous than others. Fourth, refuse to condemn people, no matter what they have done or are doing. Condemnation isn’t in my job description. I’ve been invited to the mercy seat, not the judgment seat. The latter is for God, not me.

Finally, there’s the sin thing. And this is where it gets sticky. I’ll leave that for next time.

* John 8:2-11 is probably not a part of the original gospel. The description of an authentic event may have been added later to John’s gospel in what seemed like an appropriate place. Some scholars speculate that the account may have originated with Luke, and in some manuscripts it is included in the gospel of Luke.