Here’s a glimpse back to my days as Dan “Max” Mayhew, a humor columnist. I thought Valentine’s Day (and Jody’s birthday) might be a good time to reminisce about my foibles and “foo-pahs” in the area of romance. Enjoy…

February is a painful month for me. It always reminds me of how many times I have blundered into the romantic abyss. Allow me to recall one of my most brilliant misfires…

Maybe I should have known better, but I really thought this one through. It had romance 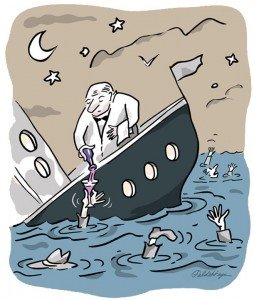 written all over it: A warm summer night during the Rose Festival and a quiet dinner cruise on the Willamette River for our anniversary. I could picture the lights along the waterfront; Judy on the deck, wind playing in her hair; the sparkle of her eyes in the moonlight. Magic!

Now watch closely as I make this evening disappear.

It was a case of overconfidence based on the fact that I had been painstakingly careful. I knew that the fates always conspire against me, so I took extra care to thwart any unforeseen circumstance.   This night was going to go off without a hitch or my name wasn’t “Max” (and it wasn’t. It still isn’t. Think about it. If you had these things happen to you, you wouldn’t use your real name either!)

I called the reservation number a week ahead of time.  I verified the boarding information. I paid in advance so we wouldn’t have to worry about the bill. I checked out Waterfront Park on a business trip to scope out the situation. I had covered every possible eventuality. Romance was in the bud and ready to bloom! Nothing could possibly go worng—make that, wrong.

So, the magic night arrived. We strolled, hand in hand along the river among the laughing crowd at the Rose Festival Fun Center. We smiled cheerily at the tattooed teenagers with railroad spikes through their eyebrows. We exchanged knowing glances as we watched children nag their parents for another fifty dollars for the carnival rides. We walked gratefully away from “The Zipper” as somebody’s kid staggered off looking kind of green, and yarked on his shoes

The night was electric.

Eventually we wound up along the seawall where the Rose Festival ships were moored. I paused. Judy looked inquiringly at me as if to ask, “why have we stopped here next to the Corps of Engineers dredge?”

“Shall we go aboard?” I asked with a romantic swagger.

On board a member of the crew who was checking the reservation list greeted us: “Name, please?”

“Mayhew for two,” I announced.

The host scanned his clipboard for a moment. “I’m sorry. We have no Mayhew on our list.”

No problem. I had planned for that, too. In my pocket I had a piece of paper on which I had carefully written our reservation number. I took it out and read it to him. He looked puzzled, and then assured me he would look into the matter. After seating us, he vanished only to return a few moments later. Not only were we not on the passenger list, but the number I gave him was not even a part of their reservation system. Apparently our reservations were for the cruise a quarter mile up the waterfront. Not to worry, though, he would be happy to accommodate us.

The violins that had been playing in my head suddenly sounded like kazoos. I had a no-refund reservation on a boat that I wasn’t on while I was about to pay for a second cruise on a boat that I hadn’t even booked reservations for. For this kind of money we could cruise Cozumel!

For a split second I considered grabbing Judy’s hand and dashing off the boat to try and catch the other cruise before it pulled away from the dock at 6:30. But then I imagined us running across the dock, looking like Ivan and Olga trying to catch the last freighter out of Murmansk, leaping across the widening gap between the ship and the pier, and clinging to the gunnels like sweaty barnacles. We stayed put and spent the rest of our anniversary wondering if we were going to need to look into a second mortgage.

So much for a magic evening.

So how could this happen? I guess it was because of the Rose Festival. It seems that the reservation phone number I called is in Topeka and they didn’t know about all those ships moored in at the seawall. The girls in Topeka didn’t know their boat was parked somewhere else in order to avoid a confrontation with the US Navy. They didn’t know so they didn’t tell me.

Abra Kadabra! Poof!  Bye-bye to romance, that might have been.

This year we’re going to Safeway for Chinese food from the deli. It’s safer.