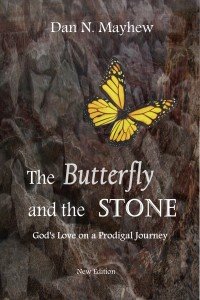 [An excerpt from The Butterfly and the Stone, God’s Love on a Prodigal Journey. Ch. 7.]

Be not like him who sits by his fireside and watches the fire go out, then blows vainly upon the dead ashes. Do not give up hope or yield to despair because of that which is past, for to bewail the irretrievable is the worst of human frailties.

It’s a useless emotion, really; still it is powerful because there is no remedy. It is the best case when the consequences of failure and miscalculation only impact us. It is mournful when our children must learn to live in spite of them.

But, what exactly is it that I regret? What, specifically, did I do or leave undone? Was I a drunkard? Was I unfaithful to my wife? A workaholic, never home? Was I cold and distant, absent and unapproachable? Perhaps, I was just dull and uninteresting, a half-man without admirable qualities. Maybe, I was too good; the bar was too high and unattainable. We should have gone camping more; had a family activity…we should have…

I can’t put my finger on it. I see the condition of Benjamin’s life and know I played a part in it. It was I who raised him so it must have been I that sowed the seed of despair and hopelessness. But when? How?

I used to be confident that I was doing the right thing and that my parenting was impeccable, or at least adequate. As the years pass, though, I become less and less certain that what I did was right. Nobody warned me that the curse of age might well be self-doubt, and the burden of time, perplexity.

Thinking back, I remember pulpit teachings and radio broadcasts; books and the family conferences. They all seemed to suggest that a parent needed only to observe some time-tested methodology and the result would surely be a godly family and problem-free kids. Go to church. Read the Bible. Pray—with and for your children; pray as a family; be firm; be clear; be consistent; dare to discipline, and all would be well. “Train up a child in the way he should go and when he is old he will not depart from it.”

The fact is all that instruction wasn’t wasted. There was truth in it. But life doesn’t abide by a strict code of cause-and-effect. There’s more to it than dropping in the correct change and receiving the desired product. There are extenuating circumstances, unexpected influences, and the “series of unfortunate events.”

Yes, I have regrets. They are irritating and prickly like a speck of dust in my eye that won’t wash out, or an invisible sliver in my skin that I can’t see to remove. I wish I could go back and do more of whatever it was that was good, and less of whatever it was that was bad. But there it is: I would go back…because Benjamin is important to me. I would set things right if I could.

Even God had regrets. In the days of Noah He said, “I am sorry that I have made them.” Then he gave instructions to Noah to build an ark so that all would not be lost when God cleansed the earth of the horror that had overtaken His prodigal race. The story of Noah is the story of a flood of divine despair, but it is also the story of unrelenting love. The human race was important to the Father as my children are important to me. The ark was God’s refusal to give up. Centuries later He will say through the prophet Jeremiah the words that were undoubtedly in His heart as he agonized over the coming cataclysm: For I know the plans I have for you…They are plans for good and not for disaster, to give you a future and a hope.

And the ark was His willingness to go back, not because of what He had done wrong (He is God, after all) but because He had the heart of a father—The Father. Perhaps that is where regret comes from: intense and unquenchable dreams for the future of the ones we love. Perhaps that is why dads all over the world cannot give up and would gladly go back if they could. Perhaps when His heart was broken the Heavenly Father flung the pieces out upon humanity where they, like seeds, sprang up in the souls of men.

Perhaps Kibran was wrong. Maybe Thoreau had it right when he said, “To regret deeply is to live afresh.” It may be that I don’t need to know what I did wrong. As I have often pointed out to others, including my children, “you can’t start from where you were. You can only start from where you are.” Regret looks back. Better that I should look forward. “Train up a child,” the scripture says, “and when he is old he will not depart from it.” In the passage of time may still be a future and a hope.