A friend of mine once said, “In the church, leadership is like breathing. It happens or the body dies.”

Other thoughts:
Leaders don’t create communities. Communities raise up leaders to express and manifest the character of the community.

In its infancy a vision is shaped by people, but in its maturity people are shaped by the vision.
Leadership is not for the assertive but for the submissive.

We may follow the direction of a leader and find that the leader is no more than a “benefactor.” In the church, we are to follow the example of a servant. It is from such examples that elders are recognized.

Indigenous faith communities ought to emerge from all this interaction with the host subculture. While it is noble and, indeed, a godly activity for a Christian businessman to run a shoe shop and to try to be Christ to his customers, something is missing if a Christian faith community isnâ€™t part of the equation. The Christian businessperson can engage colleagues, clients, and customers in a discussion of faith questions, but the best hermeneutic of the gospel is a community of Christians living it out.

I remember the sixties. Quite a decade! They even bubbled over into the decade after, presenting the nation with a whole generation of newly minted progressives. We stepped into the seventies wearing â€œlove beadsâ€ and smelling of patchouli oil and marijuana. We were loathed for our impropriety and rejected for our impertinence. We figured that was proof enough that weâ€™d thrown off the constraints of the system. Yet, as the decades have come and gone my generation finds itself looking more and more like our parents and grandparents than we ever thoughtâ€”hopedâ€”we would. God forbid that our children and grandchildren follow in our footsteps!

Whatâ€™s needed now is a new generation that steps out of the stream and walks according to the tradition of the Christ followers. Such a generation will not emerge as a reaction to the culture (people drive cars, therefore let us walk slowly), rather from a careful consideration of our faith and calling. From a clear understanding of who we are as Christ followers we can respond rather than react to the culture around us. Must we react to materialism by becoming definitively poor? Perhaps not. Perhaps the issue isnâ€™t how much we have, but how we go about having much. Using mammon and serving mammon are different, but crossing the line that separates them is easier than we wish it were.

We are called to new life, but in what way is the life we live so much different from those around us? If the life we have chosen has not blossomed with new fruitâ€”distinctive fruitâ€”we should probably wonder why and set out to bloom afresh.

There is much to be said, socially and intellectually, for bringing together people of different outlooks and beliefs; but there is not rational basis for the notion that by mixing a number of conflicting views you are likely to arrive at the truth. You cannot construct truth from a mass of dissonant and disparate material. You cannot construct truth at all: you can only discover it. And the more noisily opinionated people intervene with their contributions, the less likely you are to discover it.
~Harry Blamires, The Christian Mind. Servant Publications, p.112.

Jody and I have been away for a couple of weeks to the Midwest. The first week we facilitated Prayer Summits for pastorsâ€”Jody in Chicago, and I in Wisconsin. After that was done we slipped away to the Door Peninsula in northern Wisconsin for a little R&R. We had a restful time. The weather was windy, cold, and sometimes rainy. It even snowed lightly. No matter. The weather was a good excuse to sit by the fire and read a book, browse the gift shops or hang out in a local Internet cafÃ©.

Iâ€™m thinking about a conversation at the Internet cafÃ©.

Chit-chat with the owner of the shop turns toward the war in Iraq. Since Caleb just spent a year there (it seemed like a hundred) I know something about it; I even have some opinions. As we talk, another guy comes into the store. He buys a coffee, sits down behind me next to the door, and quietly ponders his Americano. He listens to the discussion as the topics flow: the insurgencyâ€¦the shaky Saudi monarchy and how handy it might be to create a friendly government with reliable oil reserves â€¦troop strength and long-term prospects for withdrawalâ€¦equipment needs and pressure on industrial outputâ€¦spent uranium war materials on the Iraqi landscape.

I pick up on that last subject. Not qualitatively different than the danger of landmines in other war-torn regions, I suggest. Mr. Americano, the guy behind me, chimes in with observations about the CIA and clandestine operations. The subject takes a left turn into the Viet Nam war. He wonders how many guys died in Viet Nam, and then suggests an estimate that doesnâ€™t seem right.

â€œIâ€™ll find out,â€ says the owner and turns to his keyboardâ€”tappity, tappity, tap. â€œUhhmmâ€”uhh â€¦says here, around 58,000â€¦Says itâ€™s a myth that most of the guys over there were drafted. Says two thirds were volunteers.â€

Mr. Americano: â€œWhat web site are you lookinâ€™ at? Sounds like itâ€™s right-wing. You need to get a different web site.â€

It turns out the web site was sponsored by an association of Viet Nam helicopter flight crews, but thatâ€™s beside the point. It was Mr. Americanoâ€™s response that intrigued me: find a different web site. He hears information that doesnâ€™t square with his point of viewâ€”get a new web site; get another source, one that matches my leftward idea of the world. The thing is, Iâ€™ve heard the similar things said by the right leaners. â€œWhereâ€™d you hear that? NPR?â€ say my conservative friends. â€œThatâ€™s liberal. Get another source.â€ Whether right or left, blue or red, liberal or conservative, itâ€™s about staking out the territory of truth and standing with the lot that agrees.

I donâ€™t know who coined the phrase, â€œthe marketplace of ideas,â€ but the term seems particularly appropriate. Actually, we live in a world that is more than a marketplace of ideas; it is a supermarketâ€”ideas for every preference, worldview, and ideology; for every opinion, position, and point of view. The search for truth has been all but abandoned and replaced by a quest for validation.

Where is the Christian mind in all of this?

In the dominant American culture ideas are often like mutual funds. They come bundled together, marketed and managed. Property rights and pro-life are a package deal that comes in the same portfolio with second amendment rights, privatizing social security, and welfare reform. The environment, abortion rights and gun control come packaged with subsidized housing, stem cell research and the welfare state. But are ideas like mutual funds? If we buy one do we have to buy the rest? Is it really up to the idea mavens to decide our agenda? I think not. As Christ followers our task should be to discern what is relevant to our Master and to us and then live consistently with that regardless of the direction of the market. That will require abandoning the crowd and sifting through the prospectus of societyâ€”the dominant culture and the sub-cultures, even the evangelical one.

I donâ€™t think we can afford to let our ideas be managed by the spin masters and pundits any more than we can afford to protect those pre-packaged worldviews by seeking out only sources that agree with them. We have to demonstrate more independence and certainty than that. We have to live the reality of â€œhuman life held in the hands of Godâ€¦the whole universe sustained by his power and his loveâ€¦the natural order dependent upon the supernatural order, time contained within eternityâ€¦this life as an inconclusive experience, preparing us for another; this world as a temporary place of refuge, not our true and final home.â€ (Blamires, p.67)

There is a rhythm of global dominance. No country remains the first player forever. Maybe this American hour will not last. And who will be the next leading player? Maybe next will be China. But more probably, before China, it will be the united Europe. Europe’s time is almost here. In fact, there are many areas of world affairs where the objective conclusion would have to be that Europe is already the superpower, and the United States must follow our lead.

I’ve been reading “The United States of Europe” by T.R. Reid. I was intrigued by the post-war largesse of the United States to rebuild Europe and Japan after the Second World War. What has changed since the Marshall Plan? It seems like the generous heart of America’s “greatest generation” is being forgotten in Europe by the generations that followed. New generations in Europe are now ready to move ahead, unwilling to look back.

But new generations have emerged in America, too. Now, America is seen in many parts of the world as a bully and a consumer nation-greedy for the resources of the world. Has the generous heart of the greatest generation been supplanted by the greed of the boomers, and the detachment of the generations that followed? Worse, are we the last of all to know it? Certainly there is much generosity expressed by our nation. Still, we have to own up to the charge of rampant consumerism, accumulation, and waste.

Jesus told the parable of the rich man who had decided to gather his riches into barns and take his ease when, that very night, his soul was required of him. It may well be that Jesus’ story may be applied to nations as easily as to persons. Do nations and their constituent generations have a corporate soul?

So, what of the followers of Jesus, the nation within the nation? Are we taking our cues from our national culture or from our spiritual Father? I’m going to need to think about my own heart in these matters. I am a consumer. I am attracted by the lure of stuff. I am wasteful. I’m bombarded daily with the call to accumulate. Jesus warned people like me to keep my vision clear and to accumulate treasure in heaven.

I remember a song by John McCutcheon called “Vultures.” Here’s one of the verses. I’ll close with it, at least for now. 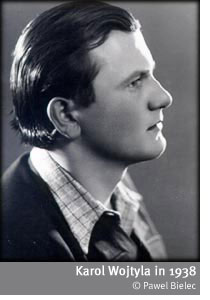 I, too, was 20, like you. I enjoyed sports, skiing, acting. I studied and I worked. I had desires and worries. In those years, now so long ago, when my native Land was wounded by war and then by the totalitarian regime, I sought the meaning to give to my life. I found it in following the Lord Jesus.

Dear young woman, dear young man, youth is the period in which you wonder what to do with your life, how to contribute to making the world a little better, how to encourage justice and build peace. Do not tire of training yourselves in the difficult discipline of listening. Listen to the voice of the Lord who is speaking to you through the events of daily life, through the joys and sufferings that go with it, the people who are close to you, the voice of your conscience thirsting for truth, happiness, goodness and beauty.

If you are able to open your hearts and minds with generosity, you will discover “your vocation”, in other words, the plan that God in his love has devised for you from eternity.

–Pope John Paul II in June, 2004. Taken from the web page for the Catholic chaplaincy at Glasgow Caledonian University in Scotland: http://www.caleyfaith.org