For seven years, from 1990-1997, I was a part of a ministry in Portland, Oregon called The Portland Fellowship. It was an affiliate of Exodus International at the time with a focus on those who were interested in leaving the homosexual lifestyle. Through a number of unusual circumstances, I became the women’s director and worked with people who were being referred to us from multiple states. I was in the minority of workers in this ministry, 95% of whom came from their own same-sex struggles.

While there, I learned that the core of those who came for help were referred from their local church, Bible college and seminary; they were men and women, old and young, who, wanting to walk with Christ, did not find transformational healing within their own fellowships. Upon hearing that there was new life in Christ, they responded with eagerness, yet often found that this was one area that the Church referred out—we have a theology of transformation, yet find it difficult to address an ‘X-rated’ issue during ‘G-rated’ services.

So, instead of equipping itself for ministry in this field, the church was content to politically position itself to withstand the growing storm. The church began to take positions on the “issue of homosexuality” in order to preserve, protect and defend a moral boundary that was fast crumbling. 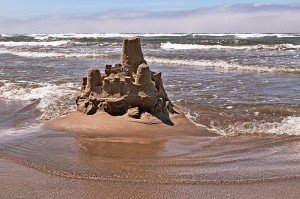 Fast forward to 2013, and we find the church face to face with a culture that now views homosexuality as normal, and the church as the deviant.

If we are to be faithful to our King and His Kingdom, we must refuse to use the same weapons and ways that the kingdom of this world uses and operates with so strategically. We must face the fact that in using such weapons we built on sand, and the relentless spiritual storm has left us with an erosion of faith, collapsed defenses, and our own loved ones still struggling. In this hour, we must pay attention to Psalm 11:3—

“If the foundations are destroyed, what can the righteous do?”

A foundation is the load bearing part of a building, or, the body or ground on which other parts rest or are overlaid. With a simple definition, we find that Christ, alone, is our only adequate foundation, the only Rock to be built upon, the only weight-bearing Cornerstone adequate for ‘such a time as this.’ God, Himself “established the earth upon its foundations, so that it will not totter forever and ever (Psalms 104:5). He established His very throne upon the foundation of righteousness and justice (Psalms 89:13). In this hour, we dare not lean upon our own understanding, but in all our ways acknowledge Him, and He will make our paths (and walls) straight (Proverbs 3:6).