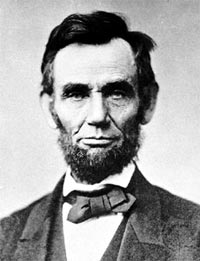 Honesty. Integrity. Courage. Nothing to gain. Nothing to lose. Finally, a candidate* we can believe in!

For the last four presidential elections I haven’t been able to find a candidate I could vote for so I finally thought, why not re-elect the dead ones? Just ‘cuz Abe is dead shouldn’t be a problem. There’s a pretty good likeness of him down at Disneyland. If the president should need to give a speech or something we can just hook him up to a computer. Why keep electing the unknowns. Let’s recycle the tried and true!

*We can’t tell you how to vote, but we can suggest what to campaign for! Join the groundswell! Order your free “Re-cycle the President” campaign kit. E-mail zootron@summithome.org . We’ll send it along. We could use a web site, too. It’s going to be a long election season. Lighten up!