Lesson on a Prodigal Journey: Trust

Nearly three hours delay in my flight. Twice we push off from the gate, finally, the third time we are airborne. My cell phone is tucked in my bag, silent and useless. I am deaf to what is happening a world away in Iraq. Five soldiers were killed in a rocket attack last night at Taji.

Caleb is stationed in Taji. It is a little less than 20 miles north of Baghdad.

Yet again I wait for news. There are thousands of soldiers at Taji. What are the chances? Small. But not zero. People win big money at the track on long odds. Five soldiers lost their lives in the gamble of war. Was Caleb one of them? I didn’t know–couldn’t know. My cell phone is dead under the seat in front of me, in a bag. All the way to Minneapolis I think about it: silent, tucked away in a bag, dead.

Caleb called last night. Did he call before or after the explosion that blew apart five families? We think the call came after the attack, that it may have been Caleb’s way of telling us he is OK, though he made no mention of rockets or fatalities. On the other hand, they are not supposed to leak information like that. The Army wants to be the first to bring the news to the families. If the attack came after Caleb’s call we may be one of them. Perhaps a U.S. government car with its somber passengers will be pulling up in front of our house while I am away. That’s how news like that comes to a family. We will find that out four months later.

I pray, affirm my confidence in the hand of God. Then I pray again as my confidence evaporates…and again. I got on to the plane with that uncertainty. As it lands in Minneapolis I am numb. When it reaches the gate I reach for my cell phone and resurrect it, fearing there may be a voice mail alert. I do not want to hear the electronic chord that signals a message is waiting. I stare at the display, fearing, waiting. I watch my name scroll across the screen. No voice mail alert. I start to tuck the phone back into its pouch I realize that I have not been breathing. And then…

My heart pounds. There is a sick feeling in my stomach. I punch *86 and wait. “You have one unheard message. First message…”

Caleb did not die that night at Taji. Sorrow touched some other family–five families. My daughter had called the paper and learned that the report of the attack had come across the wire before Caleb called–she had left the news on my voice mail. Caleb was alive.

And I learned how truly helpless I am. Whether sealed up in a metal tube at 36,000 feet with my cell phone off and my heart in limbo, or walking from the bedroom to the kitchen to pour my morning coffee, my life is out of control. The closest I come to it being in control is by knowing, by assembling information into a coherent picture that I only think I understand. I clamor for clarity, which is my best substitute for trusting God.

“Clarity,” said Mother Teresa, “is the last thing you must give up. I have never had clarity. What I have is trust.”

That is the lesson of life’s journey. Confidence and clarity are illusions, and my trust in God is feeble. That is why I have to constantly reaffirm it. Each time it crumbles under the weight of circumstance, I affirm it, hang on to what trust I have. Prayer is my *86:

You have one unheard message. First message:

Trust in the LORD with all your heart; do not depend on your own understanding. Seek his will in all you do, and he will show you which path to take.

Lesson on a Prodigal Journey: Grief

I have a picture of the three of them. They are standing in our kitchen, arms around each other’s shoulders, grinning. David and Jon are Caleb’s friends. They are our friends, too, as are their families. They are all gathered for a going away barbecue. Caleb, Jon and David are going off to war.

The “two-of-the-one-six-two” was being deployed to Iraq and so we came together as families to see that our brave lads had a proper bon voyage. I remember that warm summer night. There was laughter and smiling; encouraging words; curiosity about “the mission,” and burgers. I remember talking with Jim and 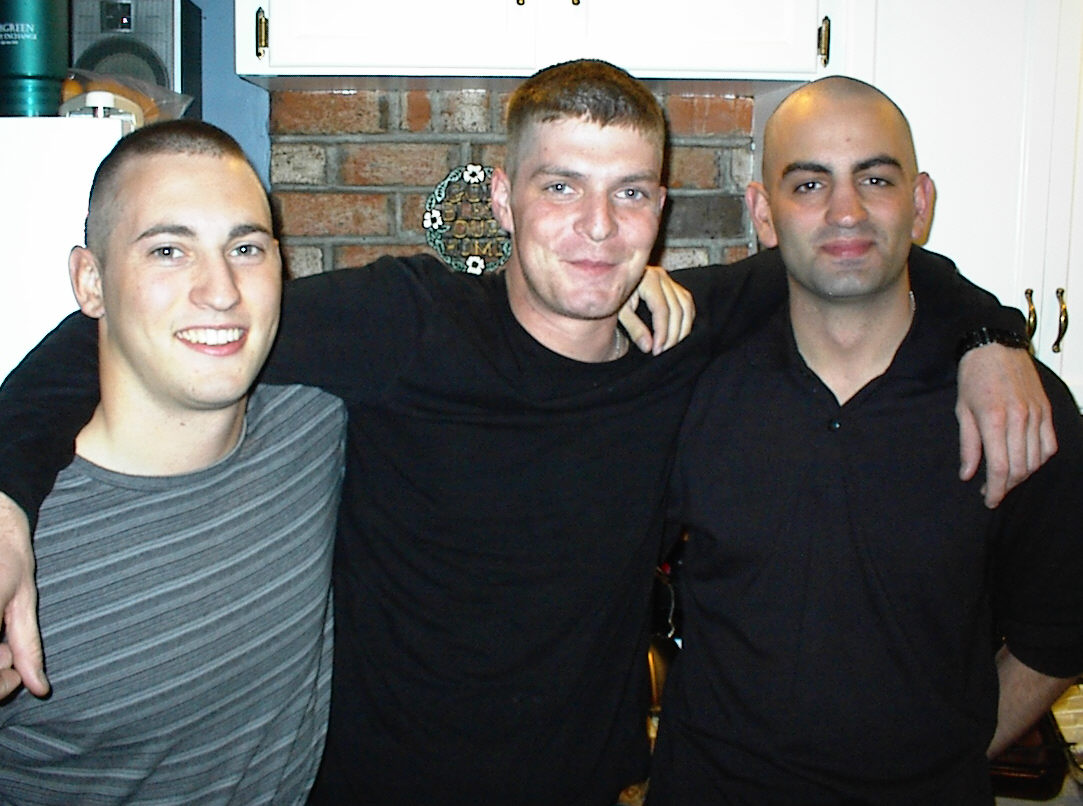 George, the other two dads—kidding around. As I recall we hung out with the boys quite a lot that night.

I also remember thinking that we were frightened. We said nothing, of course, but inside the manly hugs, the teasing and the well-timed rejoinders we were scared for our sons. We had not raised these young men to be targets for fanatic adherents to a demonic religion; we had raised them to be the strong and handsome young men that they were. They were not to be objects of hatred in some far away land. And so, brooding in the heart of each of us was fear, like an animal backed into a corner.

Soon, Caleb, Jon and David—Shadrach, Meshach and Abednego—climbed onto a plane in Oregon, bound to climb off in the blazing furnace of war. And we three dads stepped into a nightmare of uncertainty, living day by day in the simmering shadow of doubt, of the terrifying question, “what if…” With every news report, the question seared itself into our consciousness. Another soldier…two more marines…helicopter down…a roadside bomb.

In September Jody and I took off for Lake Tahoe. A friend had a cabin there and offered it to us for three or four days so we jumped at the chance to escape the usual. We arrived in the afternoon and unpacked; took a walk to shake out the kinks of the 12-hour drive; went out to eat; came back and sat on the deck; went to bed.

The following afternoon Jody called a few friends to let them know that a mutual acquaintance had been seriously ill and that prayer would be appreciated.

And then the agony of war rushed in; an inferno of grief, as Jody gasped and then cried out—agony in a horrified wail that dissolved into brokenness and sobbing.

David was dead. Killed in action. A roadside bomb had stolen another firstborn son.

Suddenly, the innocence—there is no innocence in war—vanished. Any pretense that our children were immune from the “what-if” of war evaporated in the choking sob of a grieving mother: “Jody, he’s gone! David is gone…”

And within the hour we were on the road. Plunging again into the reality of being a parent. It wasn’t Caleb that died on September 13, 2004, but it could have been. He had patrolled that same stretch of road just a day before. It was not Caleb, it was one of our other sons, one of his friends, and we were headed home to be with his parents.

The sun hadn’t yet appeared on the horizon; the Willamette Valley was still a misty grey. We were about an hour south of home. I had finally surrendered the wheel to Jody and was settling down to try to sleep a few minutes before we drove out to Jim and Marylin’s. Then my cell phone rang…Hello?

It was Caleb calling from Iraq. Somehow he had gotten hold of a satellite phone.

“I just wanted you to be with them.”

But in the next few hours he would be taking care of David’s personal effects, preparing them to be sent home.

For Jim, in the weeks after David’s death, the question had changed. It was no longer, ‘what-if?’ it was, ‘why me?’ It ached in him every time he thought of David’s smile and the reality that he would not see it again except in photographs and memory. But, eventually he began to ask, ‘why not me?’ Would he have preferred that another family, another father, endure the pain rather than he? Or isn’t that the way this world is—this battlefield? The world is indifferent to suffering and loss. It is fathers who are not.

Does the eternal heart of God weep? We earthly fathers weep over our sons. Surely the heavenly Father weeps over his. When one of his sons is lost to him he must agonize. And what of it when a prodigal charges recklessly into the world—this furnace of war?  Does Father fear for him? I know I fear for Caleb because, unlike God, I do not know the outcome of this war. He may be home from Iraq, but the war is far from over. It rages in his heart and pursues him whenever he thinks of the day he retrieved David’s things: ID tags, wallet, ring…the things he took from David’s body the day he died, and the other things that were left back at the base, on that last morning. It was Caleb who put all of them in a box and sent them home along with a letter to David’s parents, the letter they read at their son’s funeral.