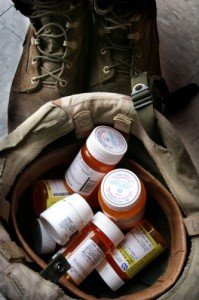 Part of our prodigal journey has included walking with our son through the labyrinth of the Veterans Administration health care system. I will never forget a meeting with him several years ago at a local park. Jarringly, the park at which I had suggested we meet was the site of a soldier suicide a few months earlier. I didn’t know that or I would have suggested another place.

Caleb was working through yet another iteration of PTSD and substance issues and we met to try to formulate yet another plan for dealing with it. As we nibbled on our Taco Bell burritos, he opened his backpack and drew out a zip-loc bag filled with prescription bottles and removed one for his scheduled dose.

“Are those all yours?” I asked.

I asked to see them. Sure enough, bottle after bottle, all prescribed by the VA. Some were vitamins, I’ll admit, but others were antidepressants, anti-anxiety, anti-psychotic meds and still others were for sleep and digestive issues—27 bottles in all.

“Does anyone have any idea what these do when they’re all mixed together?” I asked. Of course, I knew the answer: No. Nobody knows. Although, we can guess that at least a few times they result in suicide. One medication, Seroquel, an anti-psychotic drug that was distributed in six month supply bottles to deploying troops, was used as a sleep aid. A possible side-effect? Thoughts of suicide (link to the story). And Seroquel is not the only medication prescribed to soldiers with that warning on the label. Is there a connection with what Secretary of Defense, Leon Panetta called the suicide “epidemic” among soldiers?

Although Seroquel was targeted in a lawsuit earlier this year and was eventually removed from the approved list of meds for soldiers in the field and at home, my concern still remains. Why? Twenty-seven bottles. One vet had been prescribed 27 medications. The potential interactions are unpredictable.

The battle for our sons and daughters is fought on many fronts. This is one.