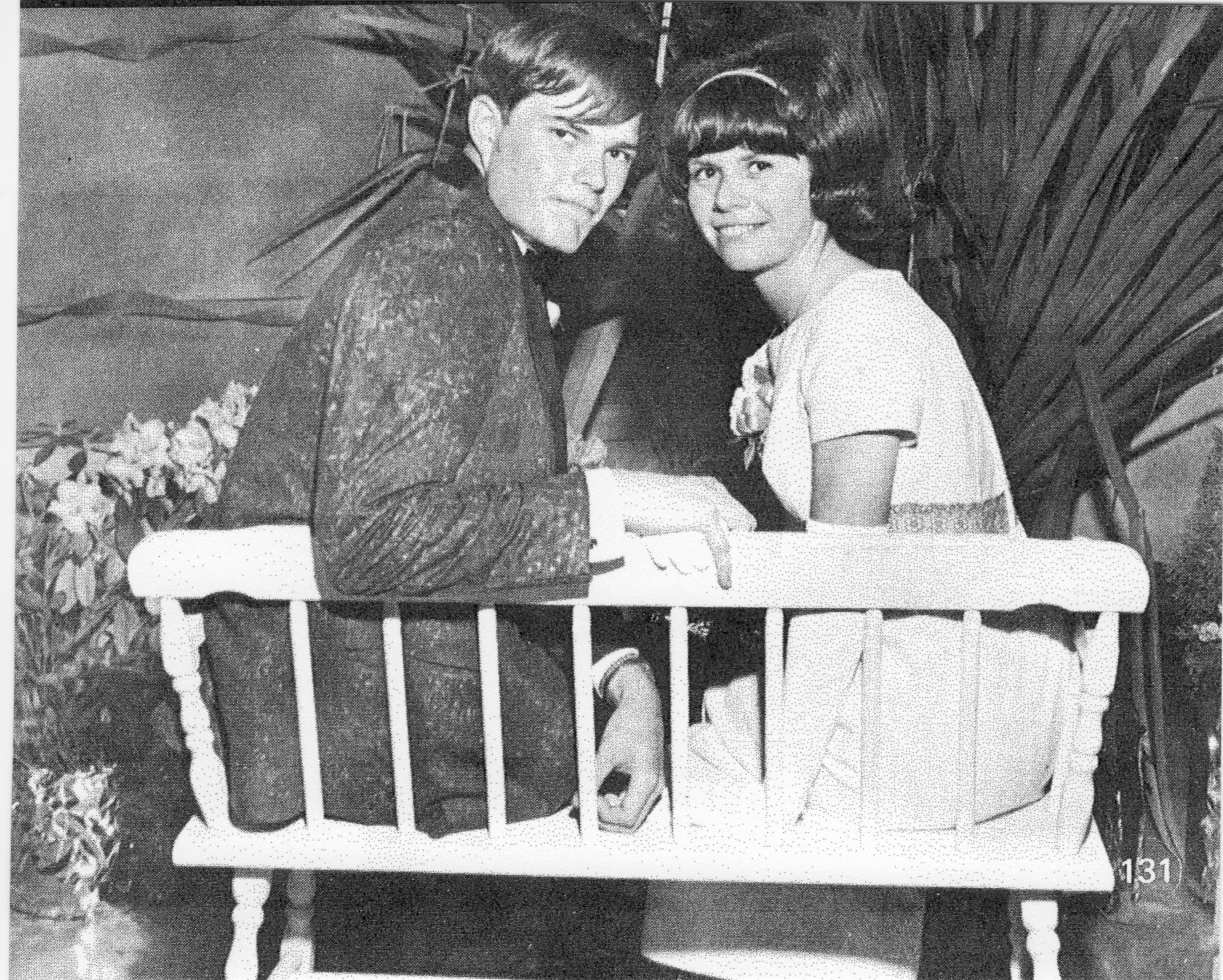 This is the day when, after a Friday night football game in 1968, I took my girlfriend out to Shakey’s Pizza where we met up with some friends. I saw one of those friends headed into the restaurant so I hollered out a greeting just as I was slamming the car door…on Jody’s hand. Though we never confirmed that her little finger was broken, it still looks a little crooked to this day. The real significance of October 18th, though, isn’t the football game, the pizza or the broken finger, or that it was my mother’s birthday. It’s that on this day 39 years ago I asked Jody to “go steady.” The rest, as they say, is history.

Now, for those of you who don’t know, I used to write a column for some newspapers called The “Max” Factor. The names are different in the column, but you’ll figure out who we…er…the characters are.

Roses are Red, Violets are Cheaper

“Max,” my wife asked, “what do you think about when you pass one of those flower stands on the corner. You know, the ones with the sign that says, ‘one dozen roses, $5.00?'”

We’ve been married 35 years. I know a dangerous question when I hear one.

I call this a “point of no return” question because, if she’s asking, it’s already too late for a right answer. For example, if I answer, “I think about how all those flowers on the corner make it hard to make my turn,” she will respond with something in the order of, “Ohhhh, you’re as romantic as road kill.” Or I may try to salvage my romantic persona by saying, “I think of you, dear. Roses always remind me of your beauty.” At this point she will look at me as though I were a victim in Invasion of the Body Snatchers, make a noise that sounds like, “fwssh!” and say, “Oh, brother! Then why don’t you EVER buy me flowers?” My actual answer was, “Only five bucks! How good can they be?”

Clearly, there are no right answers to a “point of no return question.”

The dilemma was, now that she had mentioned the flowers, I couldn’t just go out and buy her some because she had prompted me. To rush off and buy roses would indicate that they weren’t really ‘from the heart.’ Far from kindling Cupid’s fires, having to be asked for flowers indicates that the giver has the romantic instincts of a salamander.

Judy is forbearing in this regard. The longevity of our marriage is based, in part, on her relentless optimism that some day I will actually become romantic–past experience notwithstanding. It is this kind of optimism that keeps Las Vegas and Reno profitable.

For the record, I have tried. One year, about anniversary time, I planned a “memory date” to the place where we first met, Parkrose High School. Would it surprise you to learn that it’s been torn down? The closest building to the place where we met used to be the wood shop. It is now a maintenance shed. Imagine the magic in that moment of remembrance. We are driving together and I say, “OK, close your eyes and don’t open them until I tell you.”

“Where are we going?” I sense the hopeful tone in her voice.

Silence, then, “Why are we parked outside a garage?”

“Don’t you remember?” I say, tenderly. “Our journalism class used to be right over there, next to that 55 gallon drum…”

The next stop on our “magical memory date” is the first place that we went out to eat together: Taco Bell. I complete our whimsical evening in the parking lot outside Andy’s Rent-o-Rama, which was a pizza place the night I had asked her to “go steady.” There, next to the lawn tractors, the memories swirl about us.

“Do you remember what happened here?” I ask, romantically.

“Yes. You slammed my hand in the car door and broke my finger…”

You will immediately recognize a pattern here. Sudden inspirations for creative romance seem to slip through my fingers like ice cream without a cone. A dinner cruise shoves off without us. I give lingerie that provokes Judy to give me bikini briefs in retaliation. I book a romantic dinner for two at a restaurant the night a nearby hotel is hosting 450 high school football players.

If I had been the romantic lead in “Titanic,” the ship would have run aground on “Gilligan’s Island.”

In a classic example of kicking a guy when he’s down, my daughter, Jill’s, boyfriend decided to ask her to marry him. Our whole family was gathered at a crowded restaurant on New Year’s Eve when, just after we’d said grace, Sonny dropped to his knee, proposed, and opened a little box containing an engagement ring. The whole restaurant went into raptures of romantic ecstasy while I sat there remembering that I had proposed to Judy on Christmas by hiding her engagement ring in a gift-wrapped box of dishtowels.

One of Max’s Maxims is: Good judgment comes from experience. Experience comes from bad judgment. In keeping with this wisdom, I think the time has come for a turnaround. Sonny has inspired me to greater heights. I vow that this year I will become a romantic new Max. I am taking steps to sweep Judy off her feet with creative gestures of love. For example, I have been using the tanning beds at the gym where I work out. By spring Judy will be married to a bronzed Adonis with, “Max loves Judy” tan-lined onto his stomach!

And that’s only the beginning…