There are sure a lot of folks that have a beef with God. Some say they’re mad at Him; others steadfastly refuse to believe in Him because there’s so much suffering in the world. How can God exist when things are so clearly off the rails?

The first group is in a tight spot. They apparently believe in God, but they’re ticked off at Him. Mad at the almighty, eternal Creator of the universe—omniscient, omnipresent, omnipotent; who holds the reigns of truth and justice. This is just my opinion here, but I don’t think that’s going to end well. 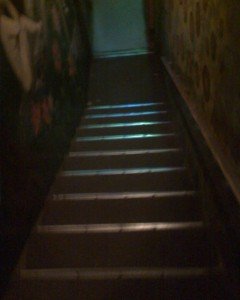 The second group seems to have a point. If God is there, why doesn’t He clean this mess up? If He is good, just, kind and all that, why doesn’t He feed the starving masses; eradicate disease; put an end to war? Why is there violence? Cruelty? Why do people fall down the stairs?

Now, that last one I have some personal experience with. As some of you know, Jody fell down the stairs a few years ago and seriously broke her ankle. Thank God for soft tissue or her foot wouldn’t have been attached to her leg. It was a bad break.

During her recovery, it was interesting to hear how people rationalized the event. Some were convinced that it was the work of the Devil—an inventive demon had sent her sprawling down the stairwell so she’d be out of commission for awhile. On the other hand, many were convinced that God had arranged the whole thing so Jody would slow down and rest. Evidently, it was easier to shove her down the stairs than arrange an all expense paid trip to Fiji.

Might I suggest another possibility? Gravity. In a fallen world, people fall down the stairs and get hurt. I know it’s a bum deal, but hey, it happens.

It reminds us of an important truth: This ain’t heaven. That’s what is behind all the other bad things that come with living on this dying planet. This ain’t heaven. We know instinctively that all is not right on planet earth, which suggests that we know (or secretly hope) there is someplace where things are right; that somewhere over the rainbow bluebirds fly.

But, since we don’t see enough bluebirds here and now, many of us have concluded that there is no heaven. God does not exist. If He did, things would be set right. Because things are not right, now, in my lifetime, they never will be. If God is God then people should not be suffering—they shouldn’t be falling down the stairs. Moreover, since so many things are wrong, it is better to conclude there is no God; that those who suffer must have their life of pain and no promise of anything better. No relief from struggle. No recompense for injustice. Just a pitiful excuse for a life, one last labored breath and then eternal night, exactly like every saint and devil that ever lived.

I continue to wonder why that conclusion is preferable to God and the promise of heaven. Perhaps we’re missing something.

When is the right time for God to fix things? Now? Next week? Or perhaps 150 years ago. Perhaps He should have ended this cartoon before any of us now living were born.

I suspect that setting things right is a process. I think the process has begun. I think our Father in heaven has put the power to change the world into the hands of some of the same race that has so effectively contributed to the world’s misery. Yes, there is suffering, pain, cruelty and wickedness. One day, all of that will cease. Until then, power is available to bring kindness, mercy, justice and right into this world, a glimpse of a different future. But for now…