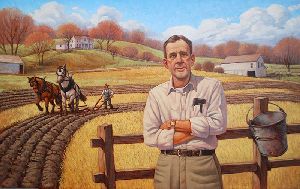 When I am asked about favorite books, invariably I mention the novel by Wendell Berry entitled Jayber Crow: The Life Story of Jayber Crow, Barber, of the Port William Membership, As Written by Himself. It is  one of a series of novels drawn from the fictional farming town of Port William, Kentucky (inspired by the author’s own community of Port Royal). In it,  Berry captures the deep and abiding relationship of the people of America’s farms and the land that has sustained them. Against the fruitful backdrop of the nation’s agricultural heritage he chronicles, with reverent grief, the rise of “the business of farming” and the resulting erosion of community. This is not an adventure story or a taut drama, but a lyrical eulogy for a vanishing way of life.

The  barber — an iconic a figure in small town America — has the perfect vantage point to observe the transition. Jayber embodies the very spirit of community as he observes the lives of those that visit his shop…

The generation that was old and dying when I settled in Port William had memories that went back to the Civil War. And now my own generation, that calls back to the First World War, is old and dying. And gray hair is growing on the heads that had just looked over the tabletops at the time of World War II. I can see how we grow up like crops of wheat and are harvested and carried away.

At its center, the novel is a love story of a kind that is rarely seen in literature. Jayber cherishes a life-long, chaste and largely anonymous love affair — a marriage of heart and soul —  with Mattie (Keith) Chatham a woman of Port William who personifies the land and its bounty. Her husband, Troy, symbolizes the ruthless invasion of enterprise farming. He is bound to the land but unfaithful to it, just as he is bound to his wife and likewise unfaithful. He is a careless exploiter of God’s gift of earth and love. Jayber, in his secret,  imaginary marriage to Mattie, is the grieving heart of the farm and its children, wedded by faith and respect to the soil.

If you must have action and adventure in your reading, you may want to skip Jayber Crow, but if you are thrilled by the skillful use of language and like being inspired and uplifted, this is a book not to be missed.

One thought on “An Homage to the Land and Her People”