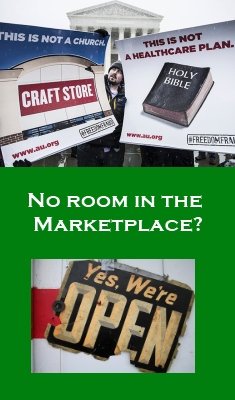 Jesus said: What are you people like? What kind of people are you? You are like children sitting in the market and shouting to each other, “We played the flute, but you would not dance! We sang a funeral song, but you would not cry!” (Luke 7:31)

I visited Hobby Lobby for the first time last month. The store was clean and well organized; staff was friendly and helpful; the store had a great selection of crafty products at reasonable prices. The only indication that this business was on the margin of acceptability was the occasional Christian melody I heard playing while browsing, and the ample selection of religious items for sale.

Of course that in itself is not a problem. After all, religious people are a significant share of the market so to cater to them makes good retail sense. Their money is as good as the next guy’s.

The problem is the products and the music aren’t just about marketing and the bottom line—that would be perfectly OK—rather, they are a reflection of the deeply held beliefs of the employer. Moreover, those beliefs inform the decisions of the corporation, and in the case of Hobby Lobby, that means that the owners believe human life, even at the cellular level, is sacred and must be protected. Hence, when it came to their attention that a handful of the contraceptives to be provided by their company were abortifacients, their conscience kicked in and they demurred, refusing to provide those drugs. Not all contraceptives, mind you, but those drugs which terminated a pregnancy.

Heresy! That a company would not provide all contraceptives, regardless of their nature, to their employees proved to some an unacceptable threat to liberty. What followed was the Supreme Court challenge, Burwell (formerly Sebelius) vs. Hobby Lobby. The outcome of that landmark case was to uphold the right of a company to make corporate decisions based on the personally held religious beliefs of the owners.

Notice what was at stake here. The court was deciding whether a business owner could be allowed to make decisions consistent with his/her religious worldview and still remain in business. It was deciding whether Hobby Lobby should be required to change its point of view and modify its creed—convert or die. In this case the Supreme Court ruled that a corporation such as Hobby Lobby could still participate in the free market.

Other businesses have not been so lucky.

Hide Out in the Pews

Consider the case of Cynthia and Robert Gifford who own a farm in New York. As part of their business they use their property for a variety of gatherings—pumpkin patch, corn maze, birthday parties; a rather impressive selection of family activities. They also have been a popular venue for weddings and receptions. And therein lies the problem: As Christians they feel strongly that a marriage ceremony reflects a covenant before God and that marriage is between a man and a woman. Therefore, they did not feel they could provide the venue for a same-sex wedding. That got them in trouble with the State of New York when a lesbian couple complained that they were denied services at the Gifford’s “Liberty Ridge Farm.”

It may be important to note that the Giffords were willing to host the reception even though they declined to host the ceremony. That surprised me. It seemed to me that both events would have been problematic, but that was their choice. Either way, they wound up in court and came out of the courtroom with a $13,000.00 fine and a decision to make. Would the fine serve to rehabilitate them and change their behavior? Would they modify their convictions as a cost of doing business? According to reports, they chose instead to modify their business. In the future they will not host wedding ceremonies on their property.* That will result in a significant loss in revenue, but it should prevent any future conflicts of conscience and keep them out of hot water with the state.

Predictably there were shouts of outrage from Christian and conservative circles—an attack on the first amendment, they cried. An affront to religious liberty! There were those who differed, though. Consider this comment posted to a report at the Religious News Service web site:

[Liberty Ridge Farm is] not a church and it is open for business to the general public. The state’s anti-discrimination laws are pretty clear on the subject…If you want to be able to discriminate on services provided to the public, declare yourself a church or do not advertise openly…Religious freedom does not give you the right to discriminate in open commerce. Such discrimination is committing a willful harmful act against another. Free Exercise of religion has never ever allowed such a thing.

The message is clear. If you have religious convictions, you should not be able to keep them and remain business. You’ve a right to your beliefs as long as you don’t intend to live consistently with them in the world of commerce. You need to be willing to compartmentalize your faith and surrender to the state. It’s the law. Otherwise, you should retreat to your church, keep quiet and make a living some other way…if you can.

It is becoming increasingly apparent that persons of sincere and unyielding faith must be driven from the marketplace. They must take the mark or be forbidden to buy or sell.

So, am I saying meanness, rancor and hostility are appropriate reactions toward consumers with whom we disagree? Am I proposing a license to slam the door or pontificate in the face of someone who requests services that impinge upon our conscience? Absolutely not. To kindly refer a customer to a competitor who does not have the same compunctions we have is appropriate and respectful. Only know that a customer whose business we decline may well circulate a bad review among friends and across the internet or, as was the case in New York, take us to court.

And if that happens, what should be our response? To arms! Take up your swords and charge once again into the culture wars? Christians, write your congressperson! Circulate a petition! Demand your rights!

No. It has always been too late for that.

These are the days of counting the cost. We live in times that force us to consider what we can and cannot do as a matter of conscience, and having discerned the course we must follow, live accordingly. If the demands of faithfulness and conscience call us to defend ourselves before the courts then make a defense, and if in the end our business must convert or die, then die it must.

3 thoughts on “Must American Businesses Convert or Die?”