We didn’t see it coming.

We probably should have, but we were so busy enjoying our freedoms that we ignored the cost being a follower of Jesus. Don’t get me wrong. I’m not taking shots at everybody else from my safe, smug little bunker; I’m in the line of fire, too. Consider the following cartoon pirated and modified from the Peanuts comic strip. 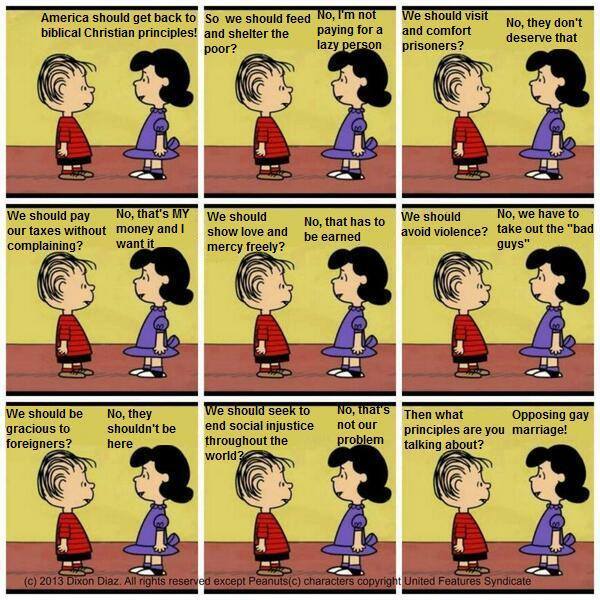 Now, let me be clear: As a matter of conscience I do not favor same-sex marriage. My reasons are not based on antipathy or phobia, but a strong conviction that the practice dishonors the intent of the Creator and distracts from the parable revealed in the part/counterpart nature of human relationship. Jody and I explored that in depth in both Marriage Rx and Sword of Submission and have blogged about it recently so I won’t elaborate further here.
My observation here centers on the hypocrisy of calling for sacrifice from people who are attracted to others of the same gender. That is the lesson of the cartoon. How hollow it sounds to, in effect, tell the homosexual he or she has to make a major sacrifice of self-denial when evangelicalism has been making excuses — “neglected the weightier matters of the law: justice and mercy and faithfulness.”
We find ourselves backed into a corner — the lower right corner, to be exact. We can’t redefine marriage. Though we be condemned as bigots and haters for taking a stand, there isn’t room for ignoring God’s clear intent in human creation. What we can do, from our embarrassing place in the lower right panel of the cartoon, is start working our way backward to the upper left, leading in the way of sacrifice and inviting those who would redefine marriage to join us. Jesus did not shrink from calling His disciples to surrender their property, relationships, their very lives. If we intend to call others to sacrifice, we must be willing to do the same.