It always comes up. The Crusades. The ruthless genocide of the Army of God that sought 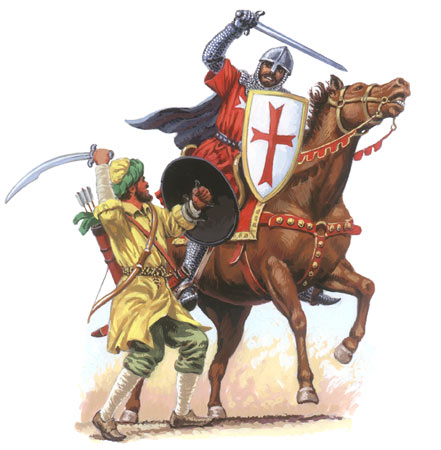 to take possession of the Holy Land, marching over the moorish pestilence and the Christ-killing Jews.

All done in love, of course.

The irony lies in the total incongruity of the message of the Master and the methods of the “Mother Church” of that day. The disconnect between message and method causes me to reach this conclusion: the crusades were not fought by Christians, they were the work of institutionalism; the face of institutional religion; the work of the systems of the world.

For something to be called “Christian” it should resemble the character of Jesus, hence I don’t think we can fight a Christian war, or maybe put our money in a Christian bank, or shop at a Christian store. Not that we aren’t to use those institutions, only that we should be clear that our status as a Christian is determined by how much our following resembles the one we follow. That was, after all, where the epithet originally came from. “Christian”

was a pejorative term hurled sneeringly at people who went around doing “Jesus stuff.” Presumably in Antioch there were people who were amused or irritated by the Jesus-followers who were trying real hard to do what Jesus would do. “Look at the ‘little Christ!’ ” they would say. “Who does he think he is? Christ?”

Actions speak louder than words. The old expression applies. If we would be called “Christian” we should be willing to act like Jesus. Those who don’t must be something else.

But the Christ followers were not always well received when the institutions rose to power. History leaves the record of Crusades and inquisitions done in the name of Christ. Yet there were heretics, those who sought to follow Jesus. They were not the keepers of history. They were the followers, the ‘little Christs.’

The bride of Christ speaks from the ashes.

One thought on “She Speaks from the Ashes”