The world has many times more poor peopleâ€¦desperate for a future, than rich people anxious to conserve the past.

I gave a lady a ride the other day. Might night have been the wisest thing to do considering the “working girls” that frequent the busy thoroughfare near our house. Honestly, it never crossed my mind, although looking back, that may have been exactly the situation. I didn’t even think about it until the encounter was long past.

I was driving away from Sacred Grounds Espresso and this woman appears out of the shadows (it was early and still dark) and flags me down.

“Can you give me a ride?” she asks. It’s cold and drizzly and I’m a little flustered, surprised to be accosted this early in the morning before I’ve had my coffee. I’m also a little irritated. I’m headed to the Grotto to pray. I don’t want to give anybody a ride. But, what would Jesus do? Sometimes I hate those stupid bracelets.

I wrestle my druthers into submission and ask her where she needs a ride to. Turns out, just a few blocks. OK, get in. Then she says she remembers me giving her a ride before. I don’t think so, I say. Then she asks for money “for her baby” who she has left sleeping in the white van just over there. Right.

Now, I’m irritated and I haven’t even figured out this whole thing might be a proposition.

She says I can pull over right here. I do and she asks for money again, “so my baby can have some breakfast.” I tell her that the ride will have to be enough. She gets more insistent about me giving her money and I get more resistant: no money.

She finally gets out. I check around the front seat to see if anything is missing. Then go take a prayer shower.

Reflecting back on the experience I had to ask myself, who was the victim in that scene. Her? I don’t think so. She was on the offense. The ride, the money, the invisible little baby desperate for nourishment. I was the victim. I was the “mark” being played by a grifter that knew the ropes. The fact is, I’ve often been the victim. Of the guy whose wife was in the car a block away waiting for him to get enough money for gas so they could get to her father’s funeral in Seattle”– she was still waiting a week later when the same guy asked me a second time. Of the lady who needed $26.83 cents for a bus ticket to Seattle to be with her dying grandmother. Of the woman who needed bus fare to get to 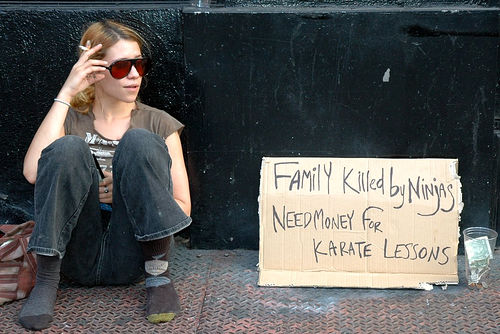 the unemployment office to get a job. Of another woman whose kids were somewhere in a car waiting for mom to score enough money so she could buy them lunch at Carl’s Jr.

My emotions have been poked, prodded, tugged, used, abused and manipulated in parking lots: “can you spare some change?” and at freeway exits,  “Disabled vet–homeless–anything help–God Bless” all over town. It seems there are victims everywhere rotting in the depths of poverty and every one of them knows by rote or by some cultural instinct that Jesus said, “give to anyone who asks.”

And that would be the easy way out. Just give. Just pony up a pocketful of quarters, dimes and nickels and move on. Put the drama (for that’s what much of the street begging really is) behind me and try to avoid the next panhandler with a heartstring to tug.

But for those of us who have taken up residence between the worlds, neither option is good enough. It’s not good enough to just pay off the professional casualty, or to brush off the practiced victim. Neither is it adequate to try to muster up a benevolent heart so we can give with the proper motive. It seems to me that what’s missing in all this is relationship, the willingness and the means to offer friendship and involvement to the one who truly would, if the chance came, begin the long climb out of dependency. Only a community can do that effectively. Good-hearted individuals burn out quickly.

But there are relatively few communities like that. They exist, have existed, but they are not easy to come by; maybe not any easier to come by than the beggar that wants to go to the trouble of climbing out of dependency. But they need to exist between the worlds. I came across this on the web:

The Shakers took in orphans, and often widows with young children. Many times a family would bring their children when they were unable to care for them. They knew the Shakers would provide a warm bed, a good meal, education and teach a skill to their children. Some would come and be known as Winter Shakers, usually men, with no home or family. They would come and stay through the harsh Kentucky winters, knowing they would be fed, clothed and offered a warm place to stay, then when the spring came, off they went. This was accepted by the Shakers with the thought that one day, these Winter Shakers, might be inclined to stay when spring came.

I can’t see how it helps to allow myself to be the victim of conmen and manipulators. You can’t buy a future for a pocketful quarters, dimes and nickels. On the other hand to act as though there aren’t real poor people nearby is taking the easy way out. I guess the trick is to be a community that is available to those desperate for a future.

Here’s the question for the “tweeners”: is the kinship of Christ-followers of which we are a part willing and available to provide a community where someone desperate for a future can learn to find it? And more, is our community willing to become a brotherhood to such people should they decide to stay and be part of the family between the worlds?

2 thoughts on “Society: Victims of the Poor”