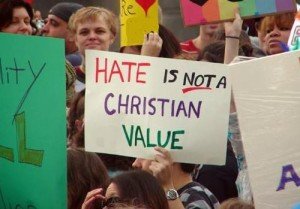 My doctor is Jewish. As such, he is one of those people who refuse to eat pork. No BLTs, no ham and scalloped potatoes, no bologna sandwiches (assuming that anyone really knows what’s in a slice of bologna). Since he and I clearly have different views on the matter I have concluded that he hates me. Why wouldn’t he? After all, I’m a gentile. Surely he can’t abide my pig-eating life.

And then there’s my Catholic priest friend. Heck, we’ve been disagreeing since the reformation. He doesn’t even think I’m in the church! If that isn’t hatred I don’t know what is.

Do you see where I’m going with this? Is it possible to have different opinions on a matter without hating the one with whom we differ? Of course. My doctor has been looking after my health for years. If he doesn’t know I like bacon and eggs for breakfast, he must certainly suspect it. It’s never come up when I visit for a check-up, although it might if my cholesterol doesn’t behave itself. But that’s not hatred. Any more than Father Jack hates my Protestantism (or house-churchism). We disagree. He might even refuse to serve me communion if I should stop by for mass someday—almost certainly he would. But hate? No.

Here’s the definition of hate:

To dislike intensely or passionately; feel extreme aversion for or extreme hostility toward; detest: to hate the enemy; to hate bigotry.

Recently, there was a protest at a local Christian university. The debate, of course, was the acceptance of homosexuality by the institution. The argument was articulated on numerous signs:

Hate is not a Christian Value!

Indeed, it is not. Neither is bigotry or malice or indifference. The question is, though, whether disagreeing with a behavior, or to feel that it is at odds with the intent of the Creator is equal to extreme aversion and hostility and intense, passionate dislike.

From my vantage point here on the outskirts of cultural discourse it seems the definition of hate has become the victim of linguistic inflation. The new definition looks something like this:

To disagree firmly with another. To steadfastly refuse to change one’s opinion concerning the acceptability of a condition or behavior. To refuse to express deferential uncertainty about one’s position.

I think we need to call bunk on much of this talk about hate speech.

Now, don’t get me wrong. There is hatred directed toward groups of people, not the least of them, homosexuals. Such vitriol and violence needs to be opposed strongly and decisively. To hate bigotry, to hate hatred is a Christian value. Hate is cancer in the human soul. It must be challenged wherever it is found, and by whatever means is necessary to protect its victims.

But do all who reject the acceptability of same-sex marriage or homosexuality deserve to be labeled haters? No more than Jewish doctors and Catholic priests. Charges of hatred need to be reserved for those whose attitude is vicious and malevolent. Hate should not be attributed to those who would express their disagreement thoughtfully, reasonably and compassionately. Let’s call the charges of “hate” for what they are: attempts to manipulate language; using semantics to sway the argument and discredit the opposing point of view. Such rhetorical devices can be effective in persuasion, but let’s not confuse them with thoughtful discourse.

One thought on “The Evolution of Hate”