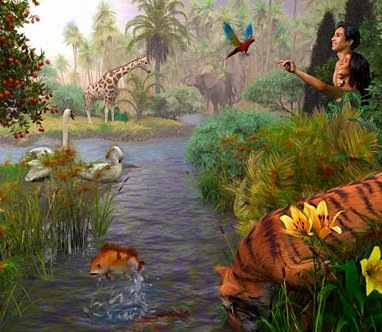 We are golden.
And we’ve got to get ourselves back to the garden.
~~~

This was the chorus of Joni Mitchell’s song, Woodstock, circa 1969. Looking back, I see a fair amount of naiveté in the lyrics, as though the eponymous rock concert might draw all of us to some sort of perfect world.

But in the words there is something. Yearning. A wish for better things — things are not what they ought to be and they should be what they once were. “We’ve got to get ourselves back to the garden…”

That is the Jesus message: restoration. He came to initiate a stunning reversal of world fortunes in which those who believed in him might participate. As He starts them on the road back to the Creator’s original intention, He tasks them with clearing the curse-born rubble that bars the gate to Eden.  There is still much to be done, but some progress has been made toward tearing down the enmities that came from the fall. Think slavery and sexism, which is no more than perfumed misogyny.

Both conditions were products of the curse — shrapnel from the disobedience in the garden. Neither was part of God’s original design. That much was clear to William Wilberforce and the abolitionists who fought so sacrificially to end the slave trade on both sides of the Atlantic. The same is true of sexism. Before the curse, the evidence points to equality between the genders: God made them in His image; male and female He created them. It was the curse, brought on by disobedience, which introduced enmity into creation and dominance of one gender over the other — “your desire shall be for your husband but he shall rule over you.”

The trajectory of scripture is toward reversing the consequences of what is called “the fall.” Jesus is the means to that end. What many call “progressive religion” is really the Spirit-empowered dismantling of the curse by Christ’s redemptive act. Hunger, violence, domination, sickness, injustice, sexism, hatred and hundreds of societal ills are weeds that Christians have been toiling to uproot for generations.

Which leads us to what seems like a logical question: since we have seen the necessity of challenging injustices, among them human trafficking and sexism, shouldn’t we also be changing our attitudes toward homosexuality? Only to this extent: Our efforts must be turned against any expression of hatred or injustice toward and among human beings. We are called upon to defend people from hatred and to preserve justice, no less homosexual persons.

That is a reversal of the fall. But to legitimize homosexuality is not. On the contrary. As we “get ourselves back to the garden,” there we will find man, made in the image of God — male and female He created them — with obvious design and intent. That never changed.